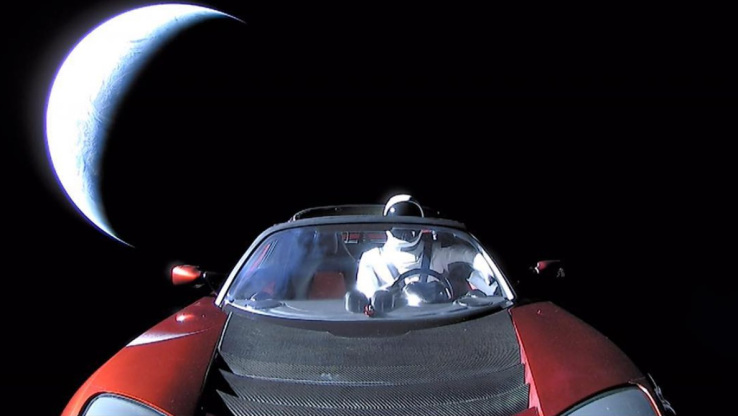 You can’t fault Elon Musk for lack of ambition.  His private company is showing Nasa how to launch heavy objects into space many time cheaper than they can do it.  Elons space company SpaceX has launched his car (and a mannequin spaceman driver) into space and on towards Mars.  He used 3 separate rockets linked together to make a more powerful vehicle.  The 2 side rockets then turned round and flew back to earth and landed vertically.  The central rocket didn’t fare so well missed its landing pad by 100m and crashed into the ocean.  Something they previously described as a “rapid, unscheduled disassembly”.

It shows what an exiting time it is where technology really could change peoples lives.  Missions to other planets.  Electric self driving cars and Hyperloop tubes to move people between cities at 600 mph.  Richard Branson has invested in a rival company that could transport passengers between London and Scotland in just 45 minutes.

Elon is predicting that he will have a fully self-driving car in 2 years time.  Tesla already sells vehicles with the ‘Fully Self-Driving’ feature, which is currently disabled. However, the company claims they will eventually enable it through software updates as soon as regulations allow it.  There are a lot of regulatory and moral obstacles to overcome.

Even Elon thinks we he wont be able to visit Mars then return to Earth.  He has said that “I want to die on Mars,Just not on impact.”  He hopes to build a ‘Mars Colonial Fleet’ of more than one thousand cargo ships which would depart ‘en mass’ could transport 200 passengers at a time, along with materials to build homes, industrial plants and shops.

Exiting times indeed. Just after the rocket launch earthly news came in that the car division posted its biggest quarterly loss.  All these ambitions will need lots of money.